2020 marks the 30th Anniversary of the start of the decade of Jiu Valley Mineriads.
Mineriad (Romanian: Mineriadă) is the term used to name any of the successive interventions of miners in Bucharest, Romania, during the post-1989 Revolution period of January 1990 to February 1999. These interventions were generally seen as aimed at wrestling policy changes or simply material advantages from the current political power. Jiu Valley coal miners had staged political protests before, from the Lupeni Strike of 1929 to the Jiu Valley miners’ strike of 1977, and minor protests after 1999.
Following the December 1989 overthrow of the Romanian dictator Nicolae Ceasescu, the coal miners of Jiu Valley got caught up in the quickly changing socio-economic upheaval and fluid political dynamics of post-Communist Romania. Barely a month after Ceausescu’s death, miners and other workers were manipulated by former regime supporters and local interests into traveling hundreds of miles to confront anti-Communist protesters in Bucharest. For the Jiu Valley coal miners, this “intervention” began a pattern of six “mineriads” over the next decade, whereby political actions by normally apolitical industrial workers were instigated by both local and outside individuals and groups in support of their agendas while the miners reacted aggressively and sometimes militantly as their mines were closed and their jobs and families’ livelihoods eliminated. The Mineriads undermined the iconic social status the miners had held under the Communist regime and radically tarnished the public’s perception of the miners and the Jiu Valley region. For the coal miners of Jiu Valley, the Mineriads were a decade of pyrrhic victories, decline and loss while they struggled for economic survival and respect.
For more detail, resource documents, and photo and video archives, please refer to the following:
Wikipedia (en)

The Mineriads (Romanian: Mineriade) were a series of protests and often violent altercations by Jiu Valley miners in Bucharest during the 1990s, particularly 1990–91. The term "Mineriad" is also used to refer to the most significant and violent of these encounters, which occurred June 13–15, 1990. During the 1990s, the Jiu Valley miners played a visible role in Romanian politics, and their protests reflected inter-political and societal struggles in post-Revolution Romania.

Even though the anti-Communist demonstration started out (and was intended to be) non-violent, the protesters charged the Parliament building and demanded the resignation of the FSN party. After that, the FSN started talks with the parliamentary opposition parties.[citation needed] 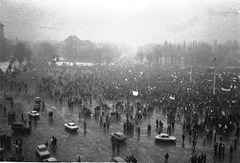 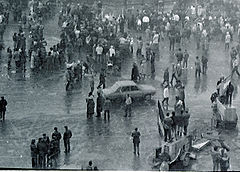 Over the course of a month-long demonstration in University Square, many protesters had gathered with the goal of attaining official recognition for the 8th demand of the popular Proclamation of Timișoara, which stated that communists and former communists (including President Iliescu himself) should be prevented from holding official functions. Supporters of the opposition were dissatisfied with Iliescu's first government, which was made up mostly of former communists, claiming that it implemented reforms very slowly or not at all. The protests mostly ended after Iliescu’s FSN obtained a decisive victory (over two thirds of the votes) in the May 20th elections. However, a small group decided to continue protests and staged a hunger strike. Following attempts of the authorities to clear up the University Square, where the protesters had been squatting during the previous mounts, some among the protesters grew violent and attacked the police headquarters and the national television station. When the police were unable to contain the violence, Iliescu appealed to the miners to "defend the country". Special trains transported some 10,000 miners to the capital, where the miners violently confronted anyone they saw as opposing the government.[2]

The official figures say that during the third Mineriad, seven people were killed and more than a thousand were wounded.[citation needed] The opposition newspaper România Liberă claimed that on 29 June 1990 over 40 bodies were buried in a common grave in Străulești, near Bucharest. Conspiracy theories and rumors circulated as to the origins and development of the mineriad, with some believing that both the Romanian Presidency and Secret Service had a hand in it. Later parliamentary inquiries into the potential role of the Secret Service contributed to the widespread public mistrust of the post-Ceaușescu intelligence service.[2]

On the morning of September 25, around 10.00 am, the miners from the Jiu Valley arrived at Băneasa railway station on several trains. Upon hearing the news that the miners were headed to the capitol, the Prime Minister and President Ion Iliescu unsuccessfully tried several maneuvers to prevent them from reaching their destination. Led by the miners' union leader, Miron Cozma, the first stop was made in Victoriei Square, where the miners asked for a meeting with Prime Minister Petre Roman. When he did not appear, they asked for his resignation. Roman then agreed and met with a delegation of miners. Cornel Tomescu, head of the sector within the General Secretariat of the Government, said that upon arrival in Victoria Square, the miners were not violent. "The miners were calm, they did not shout slogans to the Government or the president and they were sitting on the caldera."[citation needed] During this period, altercations with counter-protesters and security forces broke out. A Government building was attacked by some groups, leading to the evacuation of the building. In the evening, the miners, led by Cozma, headed towards the Romanian Television and University Square. They then went to the Cotroceni Palace to discuss with President Ion Iliescu the conditions under which they were willing to withdraw. Cozma demanded the dismissal of Prime Minister Roman in exchange for a cessation of the miners' protest.[citation needed]

ERROR: This url does not meet the site security guidelines.