Containing more than 60 peaks over 7,500 feet and over 100 crystal clear deep glacier lakes, the Retezat Mountains are some of the most beautiful in the Carpathians and include Romania’s first national park. Retezat National Park is a natural reserve area covering more than 275 sq mi., including 4.500 square acres in a strictly protected scientific reserve area called “Gemenele”. The area shelters one of Europe’s last remaining, unaffected natural primary forest and the largest single area of pristine mixed forest. Wolves, brown bear, wild boar, lynx, wildcat, chamois, roe and red deer, as well as small carnivore species such as badger and otter populate the area. In 1979 the Man and Biosphere Program of UNESCO included the park in the international network of biosphere reserves.

The southern approaches to the Retezat extend from the town of Vulcan on the east end of the valley to Campusel on the west end of the valley. Although there are several points of entry into the Retezat Mountains from the towns of Vulcan, Lupeni, Uricani, Cimpu lui Neag, and points in between, direct access to the National Park begins in the Cheile Butii area (approximately 35 km west of Petrosani) and extends west to Campusel. Bus service provides access from all Jiu Valley towns to as far west as Cimpu lui Neag. From there, visitors can hike west along the main valley road to the National Park border near Cheile Butii (approx. 3-4 km).

The Retezat Mountains and Retezat National Park are accessible from the North by way of Romania’s Route 66 (DN-66) and/or by way of train, which runs alongside Route 66, from Petrosani to the southeast or Simeria to the North. From Route 66, there are several gateways into the Retezat Mountains. Almost all the villages along the highway, from Ohaba de sub Piatra, just outside of Hateg, to Merisor, just outside of Petrosani, have access roads that run south into the Retezat Mountains. From any of these towns, taxis can take visitors directly to forest areas. Distances from Route 66 and train stations to the forest areas vary from 10-15 km. The Retezat Mountains (Romanian: Munții Retezat, Hungarian: Retyezát-hegység) are one of the highest massifs in Romania, being part of the Southern Carpathians. The highest peak is Peleaga (Vârful Peleaga), at an altitude of 2,509 metres (8,232 ft). Other important peaks are Păpușa (Vârful Păpușa, "the Doll Peak") and Retezat Peak (Vârful Retezat). The name means "cut off" in Romanian.

The Retezat Mountains have many glacial lakes, including the largest glacial lake in Romania, Bucura Lake (Lacul Bucura), which covers 8.9 hectares (22 acres) and is situated at an altitude of 2,030 metres (6,660 ft). The area also contains the Retezat National Park, Romania's first national park.

A waterfall on the Stânișoara stream

The tectonic, lithologic and morphologic conditions present in the Retezat Mountains, correlated with the orientation of the ridges towards the main air masses make this mountain group the most humid area in the Romanian Carpathians. The hydrologic network is divided into two main directions: north, towards the river Strei (the Mureș drainage basin) where all the rivers from the west, north, and north-east areas of the massif are flowing and south, towards the river Jiul de Vest (the Jiu drainage basin). The most important river course is Râul Mare, with an annual average flow of 12.9 cubic metres per second (460 cu ft/s). Waterfalls are present on all water courses in the park.

One of the specific features of the Retezat Mountains is the widespread presence of glacial lakes. Approximately 38% of the glacier lakes of Romania are found here, on the bottom of calderas, grouped in lake clusters or isolated, and are one of the biggest tourist attraction of the park. Within the massiff limits, there are 58 permanent glacier lakes, between 1,700 and 2,300 metres (5,600 and 7,500 ft). Some sources mention over 80 lakes, but here are most likely included the temporary ones as well.

The alpine meadows are particularly important, as here are found most of the alpine species, such as members of the genera Gentiana, Potentilla and Pulsatilla. The edelweiss can also be found here. At the limits between the rocky area and the alpine fields, species of rhododendron (Rhododendron kotschii) can be found. The mountain pine, a protected species in Romania, can be found on all the steep slopes of the Retezat mountains, while the Swiss pine (Pinus cembra) has a wider distribution than in any other Romanian massif.

Other species that can be found here are: hawkweed (Hieracium borzae and Hieracium nigrilacus), members of the genus Centaurea (Centaurea pseudophrygia ratezatensis, an endemic species), cat's ear (Hypochaeris maculata), an endemic species of locoweed (Oxytropis jacquinii retezatensis) and Gentiana lutea (ro. Ghinţura galbenă). On the calcareous areas of the Small Retezat [ro], a lot of rare or endemic species can be found, like Barbarea lepuznica (a species of the winter cress genus) or Pedicularis baumgarteni, a species of the genus Pedicularis.

The biggest threat for the park's flora (especially the one found on the alpine fields), is overgrazing, as there are numerous herds of sheep. The species specific to this area are replaced by less fragile ones.

A small group of chamois with Bucura Lake in the background.

Over 185 species of birds, more than half of the species that can be found in Romania, visit the park. Out of these, over 122 species nest here. Rare birds, such as the golden eagle, (also represented on the park logo), lesser spotted eagle, short-toed eagle, peregrine falcon, western capercaillie, Eurasian eagle-owl, Eurasian pygmy-owl and the black stork reside here.

There are 55 species of mammals within the park range. There are favorable conditions here for some of Europe's biggest predators to survive: the gray wolf, brown bear and the Eurasian lynx; some big herbivores like the chamois, red deer and the roe deer, while small carnivores such as the wildcat and the European otter can also be found.

In 1973, 20 alpine marmots, brought from the Austrian Alps, were introduced in the park and released in the Gemenele glacier lake caldera. Nowadays they are found all over the park, but the impact that this nonindigenous species had on other plants or animals is yet unknown. Also, after 1960, the brown trout was introduced in some of the park lakes. Studies are now being performed to check if they are responsible for the decline in amphibian population through these lakes, observed during the last years.

A subspecies of the smooth newt (L. vulgaris ampelensis), endemic to the Charpatian mountains, lives here, while the European common frog can be found all over the park. Although very few common European viper bites were reported, tourists and villagers often kill them on sight. There are several endemic invertebrate species found here: nine endemic species of butterflies, at least six species belonging to the Plecoptera order, and four belonging to the Trichoptera order. 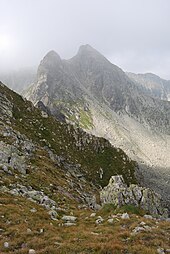 Judele Peak seen from the Retezat Peak, across the Gemenele–Tău Negru Reservation

The southern approaches to the Retezat extend from the Jiu Valley city of Vulcan on the east end of the valley to Câmpușel on the west end of the valley. Although there are several points of entry into the Retezat Mountains from the towns of Vulcan, Lupeni, Uricani, Câmpul lui Neag, and points in between, direct access to the National Park begins in the Cheile Buții area (approximately 35 kilometres (22 mi) west of Petroșani) and extends west to Câmpușel.

The Retezat massif peaks with an elevation of over 2,300m are: